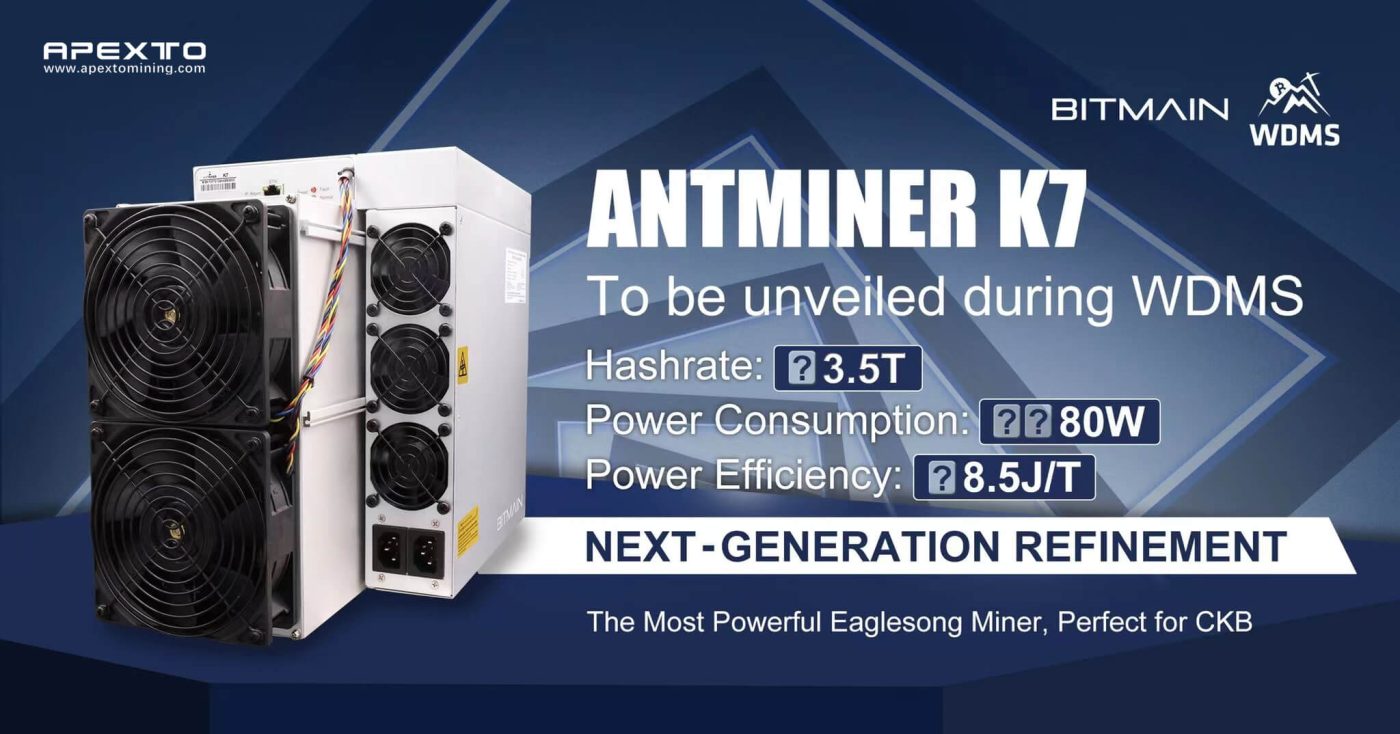 Last weekend, crypto prices continued to bounce higher heading, led by DOGE, which surged by more than 100% over the week after Elon Musk’s acquisition of Twitter was complete. Last Thursday, Elon posted a video of himself walking into Twitter premises holding a sink, which sparked excitement within the DOGE community and ignited the price of DOGE to explode by 10% in just five hours. Meanwhile, Bitmain posted a Twitter on November 1, announcing that the new CKB miner Antminer K7 is coming.

A 365-day warranty is provided starting from the shipping date. All sales are final. Defective machines will be repaired for free under the warranty policy. The following events will void the warranty: overclocking the miner; customer removal and replacement of any components without receiving permission from Broadeng; damage caused by poor power supply, lightning or voltage surges; burnt parts on hash boards or chips; damage due to water immersion or corrosion in a wet environment.

Led by the stock market rally, crypto prices bounced beginning last Tuesday, making their highest percentage moves in over three months. ETH, DOGE, ADA, SOL all surged around 10% on Tuesday alone, with ETH wiping out more than $350 million in short positions with its 13% overnight jump. BTC was not far behind, rising 5% to trade back above $20,000. As already pre-warned in our last week’s report, short liquidations surged to its highest level in recent times, with more than $700 million of shorts being liquidated on Tuesday alone. This is a significant amount even by bull market standards and such an increase in buying could pave the way for more positive moves ahead.

Indeed, the momentum continued into the following days as ETH continued to lead altcoins higher after it broke out of the consolidation range and rallied past $1,600 on Saturday. ETH subsequently went on to liquidate more than $500 million worth of short positions, its highest dollar value of shorts liquidation on record.

Even Core Scientific’s financial woes did not sour crypto sentiment. The world’s largest BTC miner revealed that it will not make payments due in late October and early November 2022 as its reserves are dwindling. The firm further elaborated that it anticipates existing cash resources to be depleted by the end of the year or possibly sooner, and should its current capital raise alternatives fail, the firm may have to file for bankruptcy protection by the end of the year.

Despite more and more miners getting into financial trouble, no one seems bothered and more BTC continues to flow out of exchanges. The rate of movement of BTC out of exchanges has picked up pace in October to one of its quickest paces in history. This has made the supply of BTC fall by an unprecedented rate, leaving only 8.29% of BTC supply on exchanges.

Bitmain has launched new machines sequentially in this big environment. Will the bull market of cryptocurrencies be coming? What do you think?